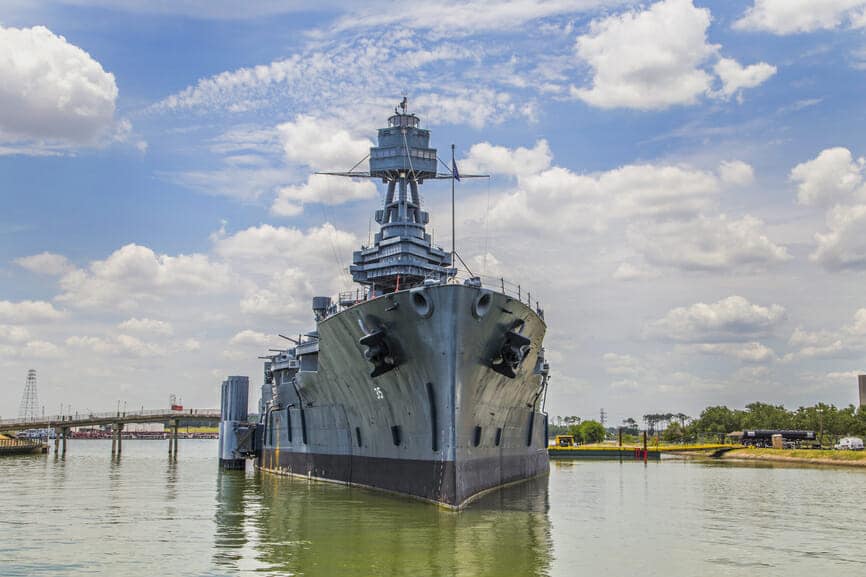 Battleship Texas took part in some of the most significant naval battles of the 20th century during both world wars. Now docked along the Houston Ship Channel, she serves as a memorial to those turbulent times. Come walk her decks, and imagine life as a sailor!

Your group is in for a serious educational treat this morning at the Battleship Texas State Historic Site, home of the Famous Dreadnought Battleship Texas, or USS Texas/BB-35.

This ship, notable for being the first permanent ship museum as well as the second US Navy Ship named in honor of the state of Texas, is a New York Class battleship first constructed in 1911, launched in 1912. The ship is also known for being the 'last surviving Dreadnought as well as the only battleship in existence today that fought in both World War I and World War II.'

During student visits your group will be able to take a basic guided tour with a certified park interpreter for an hour or take part in the Battleship TEXAS Deck Activity Package for an hour (based on age level, minimum 3rd grade, goes over the ship, WWII, and community and crew life onboard). There is also a very cool Overnight Education Program for students wanting a bit more of a hands-on learning experience. Here you will see places you didn't get to in the tour before, such as the gun turret interior and pilot house. Plus, of course, you will get to sleep in the bunkers and truly follow in the footsteps of the battleship sailors of the past.

Older groups will enjoy the Hard Hat Tour option, a 3.5-hour exploration of the ins and outs of the dreadnought ship.

Overall, your group is going to learn about the importance of the history of the ship, the mechanics behind the advanced engineering of the ship (1912 engines and 1945 weapons), and the people of the ship, from sailors to captains.