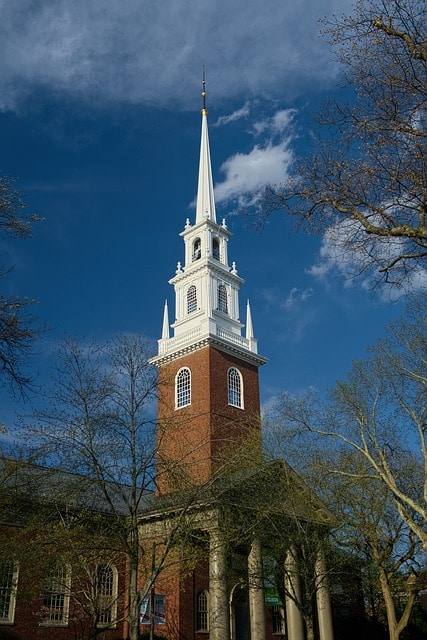 Founded in 1722, Christ Church, also known as Old North Church, is Boston's oldest surviving church building. The Old North campus includes the 1713 Clough House, a chapel built in 1918 for Italian immigrants which is now the gift shop, three courtyards and two gardens, and two townhouses used for community programs. It has the oldest set of change ringing bells in North America, hung in 1745.

True to Boston, this is also a site of revolutionary significance. This church is where the sexton and vestryman held up two lanterns as the signal from Paul Revere that the British were coming by sea. It is incredible to learn that the sexton was loyal to the patriots considering that the church was known to be generally loyal to the king and even received its silver from the British monarch.

The Old North Church site serves groups, tourists, school trips, and others curious to learn about the history of the Midnight Ride or the significance of Christianity in colonial America. Groups can rent the local after hours and request tours after the church closes. Large tour groups are not required to make reservations for church visits and educated staff is always available to answer questions. Behind-the-scenes group tours, art, and architecture group tours, and songs of liberty themed tours are available. Regular daily tours and self-guided tours are also offered to any who are interested.

School groups are given extra considerations with tours based on the social implications on church seating in colonial America, others focus on Paul Revere’s involvement with the church and more. Classroom lesson plans on the revolutionary war, the history of Boston, bell ringers, and the British culture in America are posted online for teachers to utilize before or after their field trips.