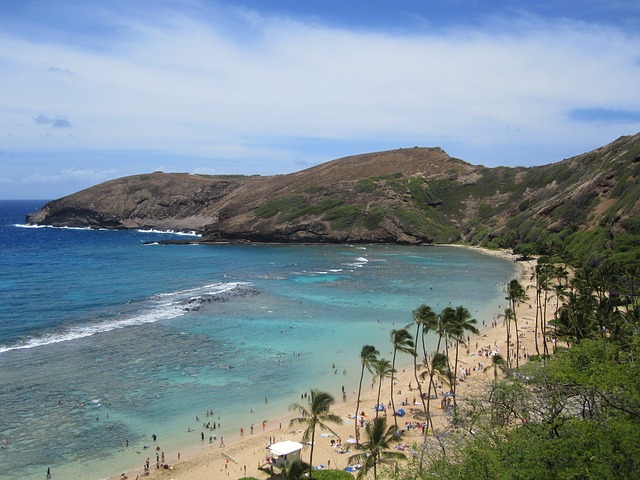 Certainly one of the most beautiful natural wonders on Oahu, Hanauma Bay is a nature preserve and a marine life conservation district protecting the creatures that have, in previous years, been harmed by human development. The past has seen the bay deteriorated and used improperly for commercial business advancement but now under new conservation procedures, the bay has returned to a pristine condition and is open to the general public.

Hanauma Bay is a popular destination because of its vast array of natural wildlife. Tour the area, dive beneath the deep blue surface to meet sea turtles, explore the reef, and see the large population of parrotfish, or simply relax on the magnificently white sand shore. Beneath the waves, you're likely to see such creatures as the state fish of Hawaii, known as Humuhumunukunukuapuaa, a mouthful but a beautiful fish, as well as millet seed butterflyfish, yellow tangs and much more.

There are guided tours of the bay as well as snorkeling tours but the waters and sands are open for whatever you choose to do, so long as it's kept within the rules of course. Snorkel through the schools of fish and fields of coral beneath calm turquoise waves or simply relax and explore the crater in which it is situated with peaceful ease.

The state of Hawaii and the island of Oahu, in particular, are extremely dedicated to seeing Hanauma Bay in its supremely natural condition and takes its conservation practices very seriously. That being said, they also encourage people to come and enjoy the wildlife, the scenery, and the beauty of untamed Oahu with appreciation and respect.