5 Highlights of the Amazing City of St. Augustine 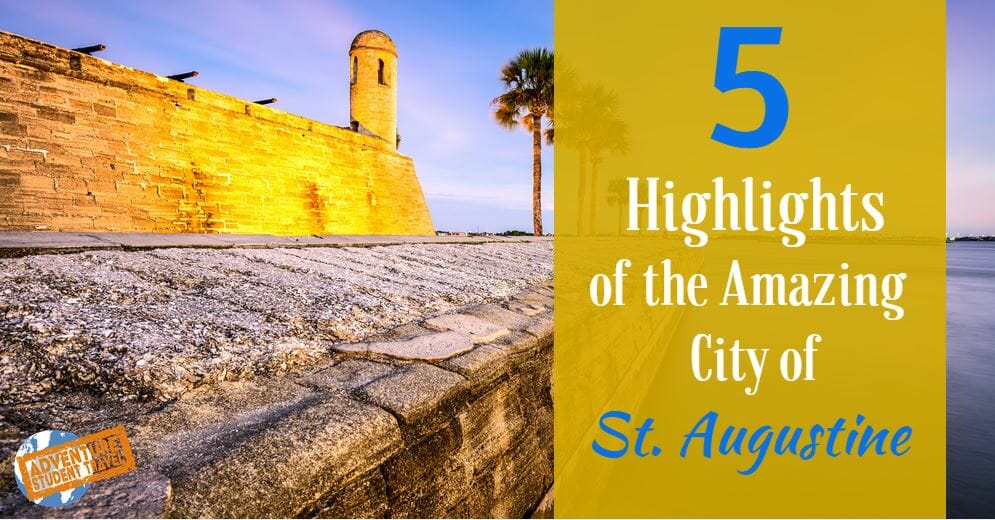 Having the second-longest coastline in the U.S., Florida consistently brings in the vacationers for the sandy beaches and warm climate. But we aren't here to talk about Miami, Orlando, or the Florida Keys. St. Augustine, Florida boasts some of the best beaches in the U.S., most alluring historical sites, most decadent food, and an air of romantic mystery one would only be able to find in America’s “Ancient City.”

Everyone has heard the history of the pilgrims landing at Plymouth Rock and the settlement at Jamestown but few know that St. Augustine is the oldest city in the U.S., as it was established by the Spanish in 1565. The Castillo de San Marcos, a fort constructed by the Spanish in the 17th century, was used by the military in the American Revolution and the Civil War but was never taken by force. The Castillo is open as a national monument to visitors as is Fort Matanzas, a grand military monument to the era of Spanish colonization. El Galeon Andalucia is an authentic 16th-century Spanish tall ship where you can experience life as a pirate, explorer, and shipmate while you walk the decks and feel the salt spray on your face. The history of St. Augustine is as important to its social integrity as anything and for this reason, the city offers brilliant interactive historical tours, exhibits, monuments, and more.

Scenic
St. Augustine boasts 43 miles of pristine, sandy beaches perfect for swimming, sunning, and surfing. Anastasia State Park has four miles of beaches, 1,600 acres of wildlife and scenery, and the Coquina Quarry where coquina stone was mined to build the Castillo de San Marcos. Kayak on the water, play volleyball on the beach, buy a souvenir at the gift shop, or explore the tidal estuaries that line the coast. Vilano Beach is another beautiful location with beachfront rentals, boating opportunities, and waterfront sporting activities. Florida is teeming with life from the beaches to the marshes, from alligators to sea turtles. Kayak along the river with an eco-tour, travel through the low-hanging trees, and past the flora and fauna of the American Southeast. For more contained wildlife, visit the St. Augustine Alligator Farm or tour the Wild Reserve.

Mysterious
With multiple occupations and colonizing countries comes cultural influences that infuse the local color with unique shades of exoticism and flair. Experience the traditions, religions, and legends that you can only find in the “Ancient City.” Several attractions focus on the paranormal tales such as GhoSt Augustine tours of the city’s supposedly haunted sites and Wolf’s Museum of Mystery, where you can find anything from an Exorcist display to a Voodoo shrine and Alien Mortuary exhibit. You may have heard of Ponce de Leon’s search for the fountain of youth in Florida, and it may be in St. Augustine! Stop by the Fountain of Youth Archaeological Park where you may see the site of the original settlement, several acres of beautiful, lush waterfront landscapes, and a spring that just maybe the Fountain of Youth.

Wild
The wildness of St. Augustine is influenced by its history and “mystery,” a combination of Spanish excitement and American freedom. The beauty of this coastal city is magnified as you watch the sunset behind the Bridge of Lions or over Matanzas Bay. Explore the city by night with dark tours or visit the local haunts like the Limelight Theatre where live music, comedy acts, and mystery theater are performed. Ponte Vedra Concert Hall, Auggie Dogg’s nightclub, the St. Augustine Amphitheater, and the Black Raven Adventures interactive pirate cruise are all excellent and curiously different ways to end a day of touring. Let loose, dance, laugh, have some good food and take in the romantic views of the water sparkling under the twinkling golden lights of the city.

Delicious
St. Augustine has nearly every type of cuisine under the sun from American style dishes to Florida seafood, traditional Spanish, French fine dining, and even Caribbean cuisine. Streetside food trucks offer quick eats while the fine dining establishments present you to the world of excellent menus with views to match any city. Taste the culture in every bite, that mouth-watering deliciousness that comes from time spent perfecting talent. Old City House Inn and Restaurant is located in a Spanish colonial-style house, has comfortable, plush seating, and highly-rated international cuisine. The Kookaburra coffee shop offers Australian pies, pastries, and the best coffee in town while Pizza Time brings New York-style pizza to Florida.

What makes a good vacation destination is the city’s ability to offer you everything you need to relax and enjoy your time away from home. St. Augustine may not be Miami or Orlando but, in being the nation’s oldest city, she does have something special to offer. Spanish pirates, the Fountain of Youth, ghosts, ocean views, alligators, and mouth-watering seafood are but a few of the things you will find on the cobbled streets of this mysterious and historic city.