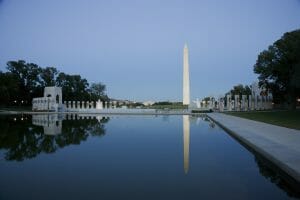 Student trips to Washington D.C are educational, exciting, and memorable for everyone involved! Take this epic 1-day student trip to D.C and see our nation's history and democracy up close and personal!

Southwest Waterfront - The District of Columbia isn’t all about monuments and American marvels, it’s also about culture and community, two ideas reflected well within the Southwest Waterfront, or District Wharf.  This residential neighborhood blended with business community is a waterfront region in of itself within D.C, a place many people call ‘the most exciting neighborhood in the history of the nation’s capital’. That’s a really huge role to fill, we know, so what’s all the fuss about? Well, here at the Wharf your group can enjoy amazing views, popular restaurants, and plenty of entertainment, all of this mixed with a style and historic grace that only D.C can pull off. This is considered to be both “Washington’s next great meeting place’ and the very spot where ‘D.C meets the water’. There are numerous parks, piers, water recreation options, fitness opportunities, and music and shopping here!

National Mall - Millions of visitors start their Washington, D.C. tours at the National Mall every year. This two-mile stretch of land between the U.S. Capitol Building and the Lincoln Memorial is a beautiful, historic, tree-lined avenue where Americans gather for both fun and politics. This is the historic site where the Reverend Martin Luther King, Jr. gave his iconic and poignant "I Have a Dream" speech, where protesters rallied against the Vietnam War and modern-day marchers gather to speak their piece against the government. While the National Mall is a landmark in history, it is also centrally located to several major D.C. attractions. Locals and tourists tour the National Mall's incredible sites such as the Washington Monument, the memorials devoted to President Jefferson, Martin Luther King, Jr., and President Franklin Delano Roosevelt, and the National Gallery of Art.

White House - What is the first place you think of when you think of Washington D.C.? The White House, of course! This presidential home is a popular tourist destination for the entire world, officially named as the ‘most famous house in the U.S’. Not only do you get to experience an integral part of U.S history while here, you get to see an integral part of its present and it’s future. Walk through the same hallways the presidents of our past have as they made some of their toughest and most important decisions, something that could very well be happening during your current visit with President Donald Trump doing business somewhere throughout this building. Self-guided tours happen on a first come first serve basis each Tuesday through Thursday, 7:30 am to 11:30 am, Friday and Saturday until 1:30 pm.

Washington Monument - The Washington Monument is undeniably one of the most iconic attractions in D.C, the marble obelisk standing 555 feet above the National Mall. The National Mall in itself is considered to be ‘America’s Front Yard’, with over 200 years of patriotic history as the very symbol of our nation and democratic values. The entire park is D.C’s premier civic and symbolic space.The Washington Monument itself was built to commemorate our country’s first president and once commander-in-chief, George Washington, the ‘first in war, first in peace, and first in the hearts of his country men’. You will learn all about his history and influence in our nation at this site, with several NPS guided tours offered daily. Find a tour by heading to the east side of the monument by the circle of flags. **Note that the interior Washington Monument will be closed for renovation until Spring 2019, though your group may still walk around and site see!

Thomas Jefferson Memorial - During your group trip to D.C be sure to check out this top attraction, the Thomas Jefferson Memorial. This highly popular presidential memorial dedicated to the legend himself, Thomas Jefferson. Jefferson was one of the most important American founding fathers, being the main drafter and writer of the Declaration of Independence. He was a statesman and a visionary, he was even the first Secretary of State for the United States! His legacy stands proudly inside the rotunda, a 19 ft bronze figure you have to see for yourself.The columned rotunda was built in the style of the Roman Pantheon by  John Pope, Otto Eggers, and Daniel Paul Higgins. They built the establishment on a man-made reservoir called Tidal Basin, a massive white, neoclassic marble memorial sitting on a reflecting pool well known today.