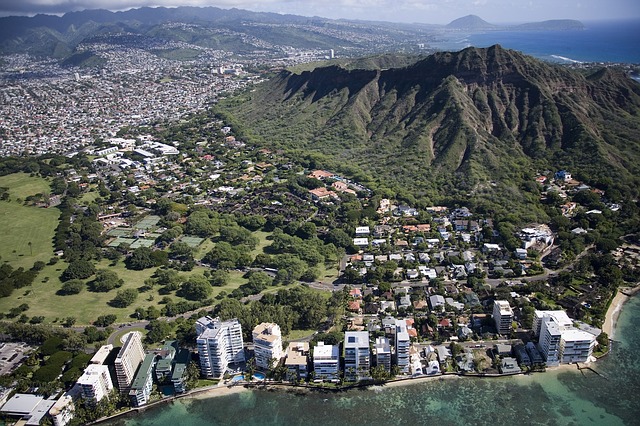 This trip is perfect for seasoned travel and new-comer alike. Discover all the most popular sites that make the island of Oahu one of the world's favorite! Discover the magic of the islands in your 6 day Hawaiian Tour. The abundance of fun and exciting activities mixed with educational cultural experiences makes this the perfect destination for any school trip. Teachers will love the guided tours of some of Hawaii's most famous attractions and seniors will revel in the fun and relaxing atmosphere of the islands prized worldwide. Don't forget that all of our tours are 100% custom. What you see here is only an example of the "typical" Hawaiian tour. Our skilled agents will be happy to create a tour to fit any group's needs.

Traditional Flower Lei
Your student travel group has landed - a warm, tropical breeze kisses your face as you draw your first sweet breath of Big Island essence. Friendly greeters approach, welcoming you and your fellow travelers with a wonderful, warm "aloha" and place a beautiful lei crafted of colorful and oh, so fragrant fresh exotic blooms— a heartwarming traditional symbol of welcome and love in Hawaii – around your neck. Let the magic begin!

Kuoloa Ranch
Enjoy a full day of amazing island adventure including kayaking and exploring, a canoe ride, and a rousing beach volleyball game on the scenic 4000-acre refuge Kuoloa Ranch. You will delight in an authentic Fire Show performed by Chief Sielu, visit a macadamia farm ( you’ll get to crack a few nuts!), and relax and enjoy a BBQ lunch on the secluded and serene white sands of Secret Island offering unparalleled views of Mokoli’i Island (Chinaman’s Hat) and lovely Kaneohe Bay. Along Came Polly, You, Me and Dupree, Fantasy Island, and other popular Hollywood productions were filmed at this very location!

Learn the Hula
Once you’ve enjoyed lunch on the Secret Island, a Hawaiian Kumu (teacher) will introduce you and your student group to the origins of Hula, the ancient dance that combines grace, spirituality, and athleticism. Hula is one of Hawaii’s definitive cultural practices and this event is a fun-filled interactive learning experience; what better way to wrap up your Kuoloa Ranch excursion? (P.S.: You‘ll work off a little of that yummy beach BBQ!)

Hike Diamond Head
Well-known landmark Diamond Head (Le'ahi) juts about the landscape near the eastern edge of Waikiki's coastline; you and your fellow travelers will enjoy a pleasant morning hike on the mountain before you depart the Big Island for home. Learn about its volcanic creation, discovery, and cattle ranching history as well as modern-day military use of the “Gibraltar of the Pacific” as you’re escorted on a 763’ trek to the summit. Once at the top, you’ll discover cool old bunkers on the crater rim and a navigational lighthouse built in 1917, and swoon over stunning 360-degree panoramic views of beautiful Waikiki Beach, emerald green mountains, and the sparkling, blue Pacific. This memorable excursion lasts approximately 3 hours and is a notable accomplishment, indeed: hikers are presented with an authentic Certificate of Achievement upon completion. Don’t forget your cameras!

Pearl Harbor & USS Arizona Memorial
You and your student group will cherish the powerful experience of a visit to the USS Arizona Memorial at the Pearl Harbor Visitor Center; over one million guests make the trip across the water every year to pay their respects to the selfless 1177 men and women who lost their lives in the ultimate sacrifice on December 7th, 1941 - “The Day of Infamy.” Accessible only by boat, the iconic USS Arizona Memorial spans the sunken hull of the ambushed battleship without ever touching it. A world of exploration through a sobering cross-section of wartime history awaits guests upon arrival; sweeping panoramic views of now-peaceful Pearl Harbor and the USS Arizona Memorial serve as a grand backdrop to this fully - immersive WWII history lesson.

City Tour of Honolulu
Explore legendary Honolulu landmarks on this short city tour that treats guests to an interactive island history lesson! You’ll visit the Punchbowl National Cemetery of the Pacific (Courts of the Missing), The Governor’s Mansion (Washington Place), the State Capitol Building, the fabulous Iolani Palace – the only royal compound on U.S. soil - and see the stately King Kamehameha statue.

National Cemetery of the Pacific (Punchbowl)
The National Memorial Cemetery of the Pacific is charged with the important task of honoring those brave men and women who have made the ultimate sacrifice while serving in the United States Armed Forces. Millions of travelers visit the cemetery each year, and it remains one of the most popular tourist attractions in Hawaii. The Cemetery showcases a magnificent pathway lined with dozens of memorials donated by various organizations and foreign governments to honor America’s veterans, most commemorating service members of 20th-century wars, including those killed at Pearl Harbor.

Washington Place (Governor’s Mansion)
This elegant mansion, built in 1847 for well-known American trader Capt. John Dominis is perhaps best known as the former home of Queen Lili‛uokalani, Hawai‛i’s last reigning monarch. Subsequent to her marriage to the Captain’s son in 1862, she would call Washington Place home for more than five decades. The stately residence has remained at the center of social and political life in the Hawaiian Islands for more than 160 years and has served as the official residence for the Governor of Hawai'i since 1922.

State Capitol Building
This landmark structure’s intriguing design is deeply symbolic, with its pillars resembling palm trees, its legislative chambers shaped like volcanic cinder cones, and its central court - open to the sky - calling to mind Hawaii's open society. 7500-pound replicas of the Hawaiian state seal hang above both its entrances; reflecting pools evocative of the Pacific surround the entire building, which replaced Iolani Palace in 1969 as the seat of government and houses the offices of the Governor, Lieutenant Governor, and the state legislature.

Iolani Palace
The Iolani Palace that exists today is actually the second to sit on the grounds and the only Royal compound on U.S soil. The original was a wooden structure called Hanailoia and was built by Mataio Kekuanao’a in July 1844, long-time Royal Governor of Oʻahu, for his daughter Princess Victoria Kamāmalu. The current Palace served as the official residence of the Hawaiian monarch until 1893 and features a unique architecture seen nowhere else in the world; it was carefully restored and opened to the public as a museum in 1978.

King Kamehameha Statue
Magnificent warrior, diplomat, and leader King Kamehameha I united the Hawaiian Islands into one royal kingdom in 1810 after years of conflict; this well-known statue stands in front of Aliiolani Hale (home to the Hawaii State Supreme Court) just across from Iolani Palace and a short walk from historic Kawaiahao Church and the State Capitol. The 18-foot bronze likeness is one of Oahu’s most photographed landmarks, and every June on Kamehameha Day it is lovingly draped with fragrant lei in celebration of Hawaii’s greatest king.

Authentic Hawaiian Luau
Are you ready for the real deal? You and your student group will be guests of honor at an authentic Hawaiian Chief’s Luau hosted at Sea Life Park Hawaii’s stunningly scenic Makapu'u Meadows. Show off your newly acquired Secret Island hula skills, then stuff yourselves silly at a lavish Hawaiian feast featuring wonderful traditional music, fabulous entertainment, and loads of laughs, all generously splashed with that legendary island hospitality. For a special treat, you’ll enjoy another dazzling performance by world fire-knife champion Chief Sielu.