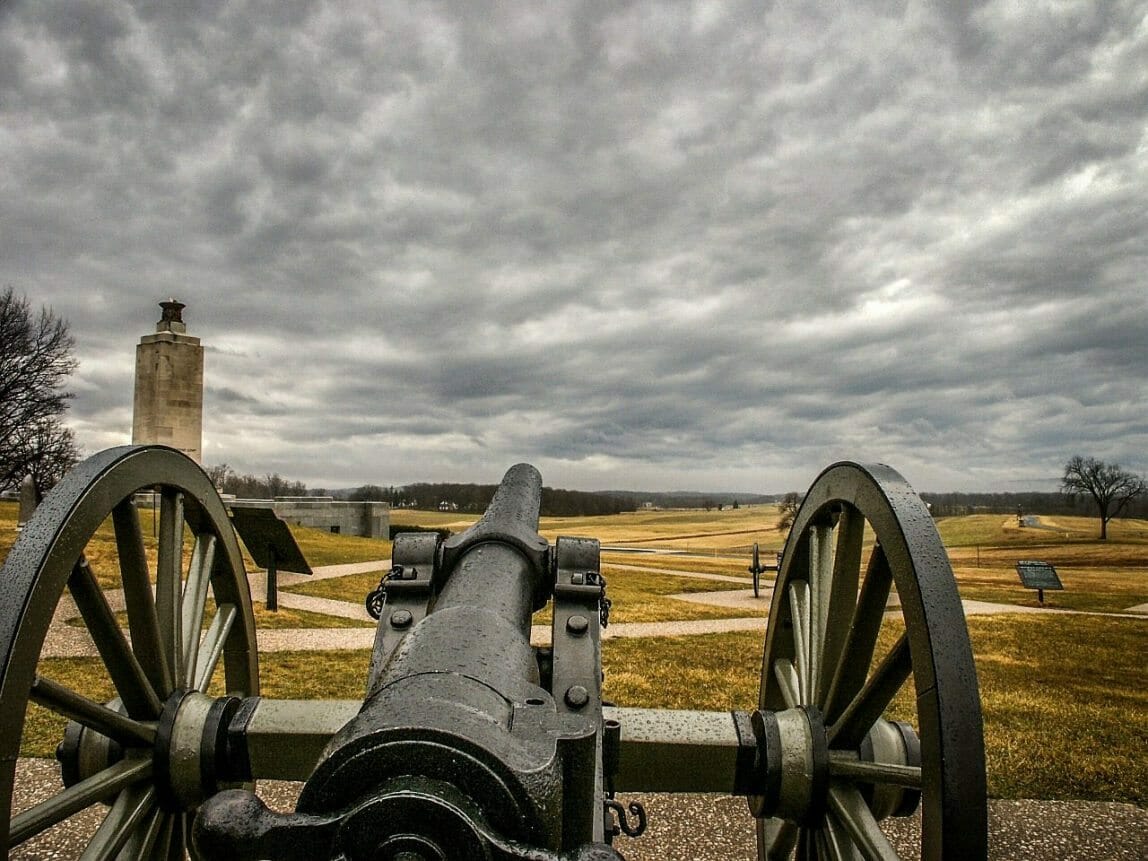 This two-day Gettysburg adventure takes you right to the heart of the action – in 1863, that is! You’ll see it memorialized on canvas, recreated to scale in a huge diorama and roaring across the big screen; you’ll strike out by candlelight to explore notoriously haunted landmarks and tour the actual battlefield, where it’s possible, if you listen closely, to hear the deafening sounds of two armies rushing head to head and hand to hand in mortal combat. You’re going to come away from this excellent educational junket with an enhanced understanding of the Battle of Gettysburg and appreciation for those brave soldiers who marched onto the field toward the promise of a shining future many would never see in the most important battle of the Civil War.

Gettysburg Museum & Visitor’s Center, Cyclorama, and Film
In preparation for your Battlefield Tour, you’ll want to avail yourselves of every advantage the Visitor’s Center offers. The Gettysburg Museum of the American Civil War tenders a comprehensive experience detailing the Battle of Gettysburg and its significance to our nation’s history through its fantastic collections of authentic artifacts and series of special exhibits, video presentations, and interactive features. After a short film narrated by award-winning actor Morgan Freeman, the cyclorama - a four-story, hand-painted canvas - unfurls before your eyes, illustrating the fury of Pickett’s Charge during the third and final day of the Battle of Gettysburg replete with cannon fire and battle cries, and sending you off into your exploration of the Gettysburg Battlefield armed with a fresh appreciation and enhanced understanding of what you’ll see, from the role of each topographical feature and a history of important battlefield landmarks, markers, and monuments to what the men carried with them into battle, how and why they fought, and when - and where - they perished. You’ll see Culp’s Hill, Steven’s Knoll, The Devil’s Den, Little Round Top, and more. Listen carefully to the wind in the trees as you scan the grounds; would you have been home, in your farmhouse kitchen, wringing your hands and waiting for news, or there, on the battlefield, charging toward your destiny with your selfless brothers in arms? The scene is set.

Gettysburg Battlefield Tour
Whether afoot or by bus, with or without a licensed Guide, your students will truly enjoy a tour of this naturally beautiful and historically significant Civil War battleground. The Battle of Gettysburg – the bloodiest three days of the Civil War - was a turning point - the Union victory that halted General Robert E. Lee's second and most ambitious invasion of the North. Commonly referred to as the "High Water Mark of the Rebellion", Gettysburg was also the inspiration for President Abraham Lincoln's immortal "Gettysburg Address.” You’ve prepared for this exploration with a few hours in the Visitor’s Center, but nothing comes close to actually setting foot on these hallowed, storied grounds where two great armies came head to head in the most explosive and bloody battle of the Civil War era.

Ghosts of Gettysburg Candlelight Walking Tour
Prepare to meet the ghosts of 1863 on this popular character-led tour that’s been introducing brave guests to “Gettysburg, after dark” for over 20 years. For decades, messages of unrest from the quaint houses and quiet fields in and around the town of Gettysburg have drifted into the ears of the tour’s creator, an acclaimed author, and ghost hunter; sightings of soldiers, moving in battle lines across the fields where they marched and died and accounts of ephemeral glimpses of a Civil War hospital and men long dead bound, eternally captive, by duty. You and your students will embark on a fascinatingly informative and entertainingly eerie candlelit trek through the darkened streets of Gettysburg to these known stomping grounds of the Civil War “undead.” You’ll explore “occupied” homes and buildings and sites where the slain once lay in horrific rows and the wounded suffered horribly, waiting in dread for the imminent relief of death, and find your way to area cemeteries were the reluctantly departed find no rest on this fright-filled foray through what may well be, acre for acre, the most haunted place in America!

Eisenhower National Historic Site
The sun is up and shining on Day 2 of your Gettysburg adventure. You and your students will be heading off to explore the Eisenhower National Historic Site, once the beloved farm of General and President Dwight D. Eisenhower. The home retains most of its original furnishings and tours offer an intimate glimpse into the life and times of our 34th president and his first lady, Mamie. Located just adjacent to the Gettysburg Battlefield, the beautiful property served as a restorative weekend retreat while functioning as a meeting place for world leaders; its peaceful setting and glorious view of South Mountain afforded a much-needed respite from Washington and was the perfect backdrop for efforts to ameliorate Cold War tensions. “I tell all the same thing—I just want to be a one mule farmer in Virginia or Georgia or Tennessee.” Dwight D. Eisenhower

Gettysburg Diorama
You won’t believe your eyes at first sight of the Gettysburg Diorama. Guests are treated to a historically accurate bird’s eye view of the three bloody days of the epic battle, fully narrated with light and sound effects and featuring models and topography to scale and presented across a three-dimensional landscape for an enhanced appreciation of the scope of this historical “moment in time.” The 800 square foot model masterfully represents more than 6000 acres of land and includes over 20,000 hand-painted figures, cannons, and structures for an unbelievable recreation of the Battle of Gettysburg.