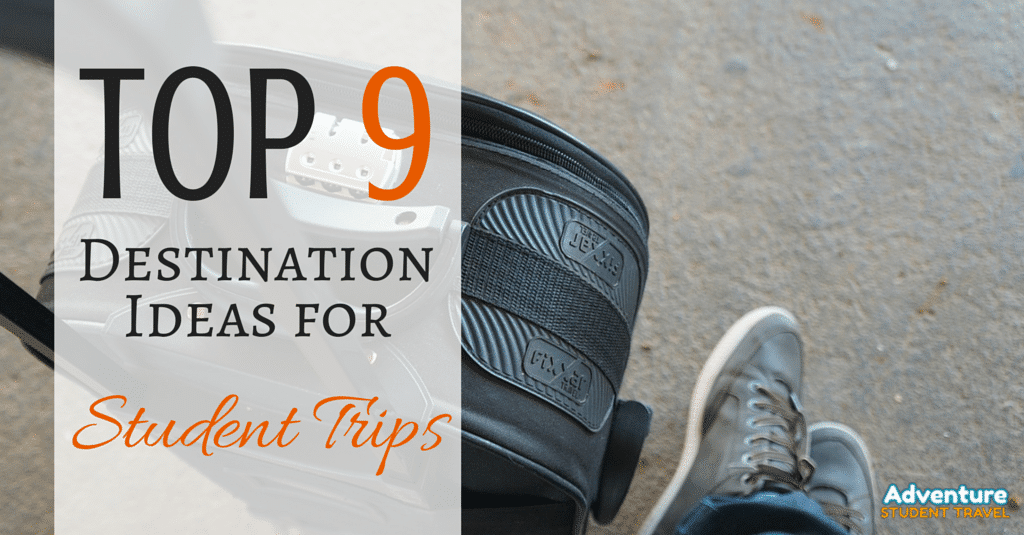 When taking an educational student trip, it can sometimes be a little difficult to choose a destination. So, let us help by giving you some amazing destinations that are proven to be as educational as they are fun.

New York City
The Big Apple is a go-to destination for trips of any kind. Being as large of a metropolis as it is, New York has any and everything you could want in a vacation spot. For education, tour historic landmarks of the country’s first capital, visit the Met, Guggenheim, or the Museum of Modern Art. If you then want a little excitement, check out Coney Island’s carnival, look down at the city from the Empire State Building’s observation deck, climb the Statue of Liberty, see a Broadway show, or an event at Madison Square Garden.

Washington, D.C.
A pilgrimage to our nation’s capital should be on everyone’s bucket list. So if you are planning a trip in the near future, look into D.C. for its variety and diversity of attractions. Visiting the monuments and governmental gems are a must-see like the White House, Lincoln Memorial, Washington Monument, and the Vietnam Memorial. However, D.C. has more to offer. Check out the National Gallery of Art, the dinosaur bones or space shuttles at the Smithsonian, or if you want something a little different, D.C. has at least six ghost tours at your disposal and shows still play at the infamous Ford’s Theatre.

Chicago
Although the Midwest is often overlooked, these states are home to some of America’s greatest cities. Chicago is a lakeside urban center for everything from art and high culture to comedy clubs and live music. The Art Institute of Chicago possesses a Georges Seurat and Van Gogh among its collections making it a world-class museum while the Museum of Science and Industry takes the cake for its interactive exhibits. Take a tour of the city’s pubs and restaurants, catch a game at Wrigley Field, or a live show at the Chicago or the Goodman Theatres.

Denver
Denver has everything from entertainment and sports centers to sports car driving adventures and orchestras. Visit the Mile High city and climb Mt. Evans, take a historic tour based on 1920s Denver, or see a live show at Union Station. With dozens of local gems, pubs, restaurants, and clubs, Denver nightlife is as interesting as its daytime attractions. See a game at Coors Field or Pepsi Center, visit the interactive exhibits at the Denver Museum of Nature and Science, then see the Colorado Ballet or a show at the Paramount Theatre.

San Antonio
Texas, the only state to have ever been its own country, has a plethora of history and cultural influence that makes it supremely unique. San Antonio’s proximity to the border makes for a vibrant and colorful Tex-Mex blend of countries. Visit the historical sites like the Alamo and the Spanish Governor’s Palace or the more modern attractions such as the Majestic Theatre, La Cantera shopping center, and the San Antonio Museum of Art. See a game at the Alamodome, catch a quote-along movie at the Alamo Drafthouse, or shop and dine at the gorgeous River Walk.

Savannah
Check out the Southern hospitality and magnanimous charm of Savannah, Georgia on your next student trip. Savannah has the antebellum charm of a debutante preserved in amber with its historic district, plantations, city squares, and beautifully landscaped Forsyth Park. Named one of the country’s most haunted cities, Savannah has at least 19 ghost tours that lead through the city’s most paranormally active districts and through the famous Bonaventure Cemetery. For educational and entertaining attractions, look into the Oatland Island Wildlife Center, Juliette Gordon Low’s Birthplace, and Lucas Theatre. You also can’t miss River Street for its shops and restaurants or Tybee Island’s lighthouse, Old Fort Jackson, and beaches.

Orlando
Orlando is a standard southern destination for student trips for good reason. Sunshine, year-round good weather, and hundreds of attractions make for a beautiful vacation spot for all ages. Disney World is a must-see as is Universal Studios and Busch Gardens. The Kennedy Space Center offers a fascinating look into NASA while Medieval Times looks into centuries past. Surf, lie in the sun, or visit one of the city’s beautiful museums. If you prefer to be always on the move, take a walking or chartered tour to see everything Orlando has to offer.

St. Augustine
While in Florida, most people overlook St. Augustine for Miami or Orlando. Although you can’t go wrong with those cities, St. Augustine is a relatively hidden gem known for its romantic and relaxing atmosphere and Cuban influences. Castillo de San Marcos, the only existing 17th-century fort in the U.S., offers tours as does the Ximenez-Fatio House. See exotic animals at the St. Augustine Wildlife Reserve, take a night tour of the city, visit the beaches or the Pirate & Treasure Museum before stopping at the Old City House and Restaurant, a 19th century Spanish Colonial building with excellent food and atmosphere.

Los Angeles
Finally, we come to Los Angeles, the golden city built on the entertainment industry. California sun, the blue Pacific, and the excitement of Hollywood. With historic and educational attractions featuring eras from 40,000 years ago at the La Brea Tar Pits to modern art, Los Angeles has museums and sites for every kind of student group. When you want to kick back, visit Disneyland, Catalina Island, Belmont Park, or the Aquarium of the Pacific. Tour Beverly Hills, shop on Rodeo Drive, see a taping of America’s Got Talent at Dolby Theatre, or take the tour of movie sets and celebrity homes.