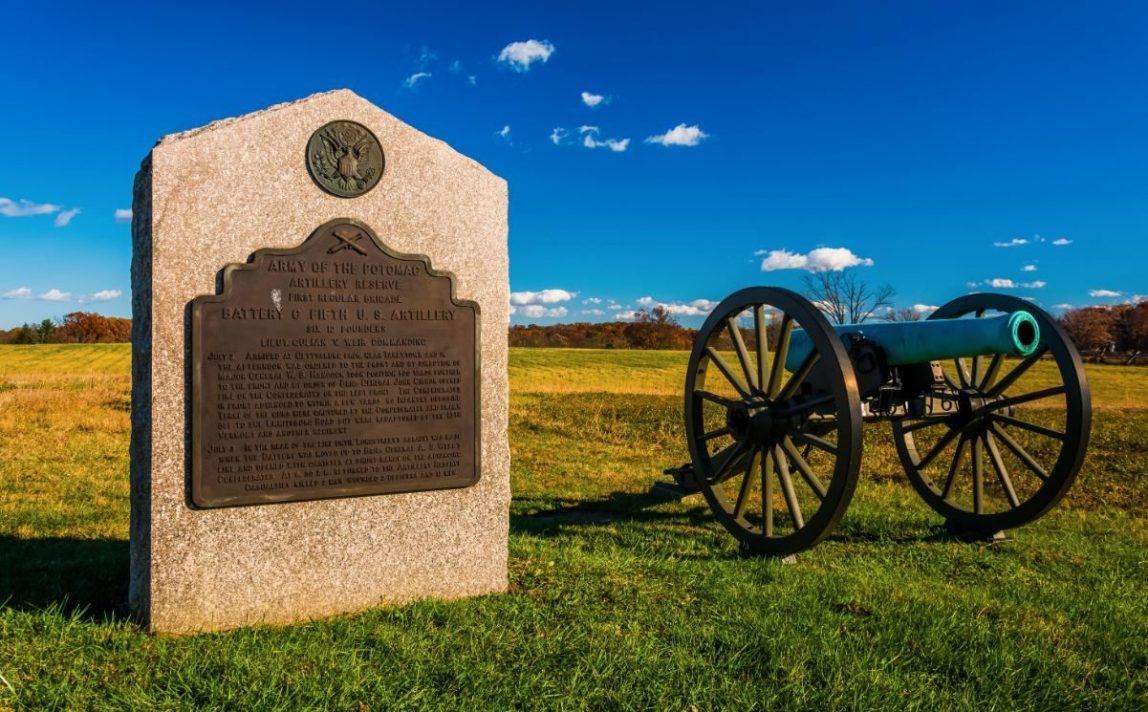 Here’s a sample 2-day itinerary for historic Gettysburg, Pennsylvania. It stands on its own, with plenty of other attractions to add on or substitute when we customize your tour, or as a great addition to Philadelphia student tours.

“Fields of Freedom” film
“Fields of Freedom” A 30-minute film shown in a new, state-of-the-art, specially designed giant-screen theater introduces you to the Battle as never before. Taken from diaries and letters of soldiers from both sides who fought at Gettysburg, this film will set the emotional stage for your time in town.
Gettysburg Diorama the largest miniature military diorama in the U.S. describes the three day battle with a sound and light show.

Gettysburg National Military Park “new” Museum & Visitor Center
The feature film “A New Birth of Freedom” will orient you to the Battle of Gettysburg and the American Civil War. You’ll also see the restored “Battle of Gettysburg” Cyclorama painting – the largest painting in the country. The Gettysburg Museum of the American Civil War tells the story of the Battle and the war through 12 galleries and includes artifacts, interactive exhibits and additional films, providing visitors with a distinctive perspective of the Civil War through the words of its participants and spectators, including Presidents Lincoln and Davis, Generals Meade and Lee, soldiers, correspondents and civilians.

Gettysburg Battlefield tour
Select a licensed Battlefield Guide on your coach, horseback tour or Segway tour of the Battlefield to learn why this Battle was fought in Gettysburg and what happened during the three days of fighting.

Shriver House Museum
Dedicated to the civilian experience during the Battle of Gettysburg, the home of George and Hettie Shriver and their daughters, Sadie (7) and Mollie (5), appears much the way it did when it was built in 1860. Today, guides in period dress recount the harrowing story of the Shriver family's experiences during the battle and the lasting effects on their lives.

The Historic Gettysburg Railroad Station head house was built in 1859 and served as the western terminus of the Gettysburg Railroad line to Hanover, Pennsylvania; Lincoln arrived here by train in November 18, 1863, invited by David Wills to give a few appropriate remarks at the dedication of the National Cemetery. The station served as a field hospital during the Battle of Gettysburg, transporting 15,000 wounded soldiers after the battle. Today, docents will interpret the history for your understanding.

Check into your hotel for a meet and greet with General & Mrs. Grant.

Eisenhower National Historic Site
After breakfast enjoy time at the Eisenhower National Historic Site. The home and farm of President Dwight D. Eisenhower which served as a weekend retreat and a meeting place for world leaders. Tour the home, enjoy a self-guided walk around the farm, or join a ranger for an exploration of 1950s Secret Service operations. The only home Ike & Mamie Eisenhower ever owned, presented today much as it was when they hosted foreign dignitaries on the farm.

General Lee’s Headquarters
Meet General Lee and tour the museum in the building used as the Confederate Headquarters during the battle in Gettysburg 1863. Uncover the history of our historic churches with a guided tour. Many were used as hospitals after the Battle. See where Lincoln prayed before giving the Gettysburg Address and where the Eisenhowers were active members of one of our churches.