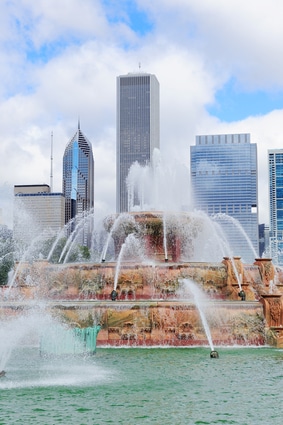 Buckingham Fountain in Grant Park in the morning Stockfresh

Often referred to as “Chicago’s Front Yard,” Grant Park is the Windy City’s largest urban park on the shores of Lake Michigan. With history, public walkways and meeting areas, popular attractions, and one of the largest fountains in the world, Grant Park is the perfect destination to spend a day outdoors in the city.

The centerpiece of the park is certainly Buckingham Fountain, a rococo wedding cake style fountain dedicated in 1927 that commands attention with its noble statues and grand design. Other notable features include Millennium Park, the Art Institute of Chicago, Shedd Aquarium, Adler Planetarium, and the Field Museum. Sports fields, performance venues, statues, and fountains decorate the area making it a world-class city park for style, comfort, and amenities.

Grant Park began its prestige in 1835 when concerned citizens saved the area from commercial lakefront development. Since that time, the area has held historic speeches such as President Obama’s 2008 victory speech after his election and Pope John Paul II’s outdoor mass in 1979. Today, Grant Park is the site of concerts, performances, and annual events. The Taste of Chicago, a music and food festival over Independence Day weekend, as well as Lollapalooza, Grant Park Music Festival, and the finish lines of the Chicago Marathon are located at the park.

Come visit the 319-acre park, take in the views, relax at a concert, and experience the atmosphere of Chicago. The park is open daily from 6 am-11 pm.