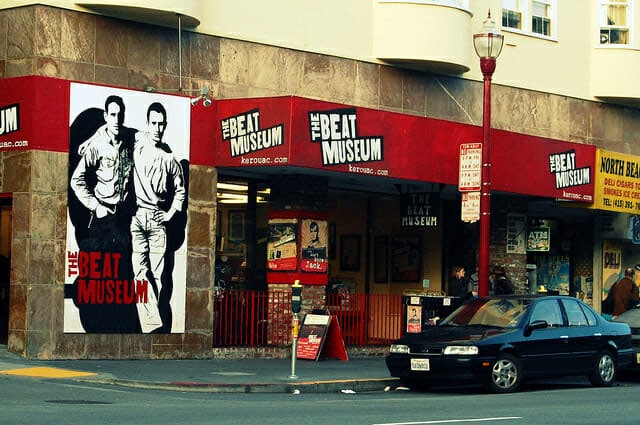 First established in 2003 and located in the popular North Beach neighborhood of San Francisco, The Beat Museum is one of the most notable local cultural institutions in the area. This museum holds memorabilia, letters, and various pop culture artifacts that represent the Beat Generation, with personal highlights from top influences such as Jack Kerouac.

Elements central to the Beat culture "included experimentation with drugs and alternative forms of sexuality, an interest in Eastern religion, a rejection of materialism, and the idealizing of exuberant, unexpurgated means of expression and being". - Shubert Ciencia

The purpose of the museum is to 'spread the spirit of the Beat Generation', said spirit encompassing tolerance, compassion, and 'courage to live your individual truth'. The 'Beatniks' was essentially a band of free-spirited artists, writers, and thinkers from 1950's San Francisco. These locally prominent members of society left an emotionally massive cultural impact during their time, and they also physically left original manuscripts, first editions, letters, and other cultural ephemera within the museum. Overall, the museum is a fine 'resource on how one person's perspective can have meaning to many'.

Opt-in for a Walking Tour during your visit, these tours offered each Saturday at 2 pm, or let us reserve a custom group tour for you, these offered at any time. These interactive and informative tour options allow you to learn the difference between a Beat and a Beatnik, learn all about the HOWL Trial of '57, explore various details of Jake Kerouac and Neal Cass' lives, and get an introduction to the 60's hippy scene, said to have began right here in the Bay area. There is also the more general North Beach Tour, a 2-hour historic tour showing the spots where these men 'loved, drank, wrote, and learned'. Various popular jazz and comedy clubs from the '50s are highlighted during this tour.