Children and adults alike can easily lose themselves in an afternoon of LEGO playtime, especially when that afternoon is spent in an actual LEGOLAND theme park!

There are three total LEGOLAND theme parks in North America (California, Florida, New York), as well as a handful more scattered throughout the world.

If you are familiar with the LEGOLAND theme park, resort, and LEGOLAND Discovery Center chains then you may already know plenty about the well-established California and Florida parks, but probably not so much about the New York park, which just opened in July of 2021.

Each park offers an excellent variety of interactive family rides, building workshops, live shows, and fun attractions, though each has a slightly different 'Land' offering, ride selection, and dining and lodging choices.

Today we are going to discuss some key differences between the already well-loved LEGOLAND Florida Resort and the new, very well-received LEGOLAND New York Resort.

LEGOLAND Florida, located in Orlando, offers over 50 rides, shows, and attractions and is considered the 'ultimate multi-day vacation destination'. This is the spot where kids rule the land of dragons, knights, princesses, and adventurers. Many families flock to this destination because unlike the newly opened New York Version, this park offers a waterpark inside its confines, as well as multiple different lodging options.

LEGOLAND New York, located in Goshen, a village in Orange County just 1 hour from Manhattan, also offers up to over 50 rides and attractions. This 520-acre park is the largest of the three and is also the first NEW theme park to be built in the northeast United States in over 40 years. Guests will enjoy state-of-the-art, brand-new features and amenities throughout the park as well as a convenient cashless pay system at this park.

Below is a more detailed breakdown of the main differences in the Florida and New York theme parks:

Each LEGOLAND theme park offers up its own variety of 'Lands', though many of them are the same in each park. LEGOLAND New York offers 7 unique areas, whereas LEGOLAND Florida offers a whopping 14. 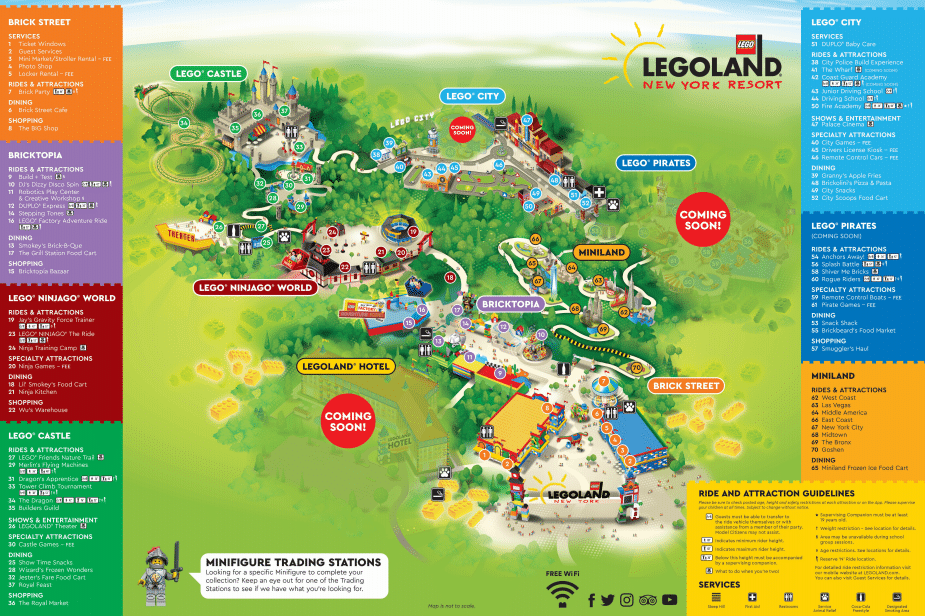 Every LEGOLAND theme park boasts between 40-60 rides, attractions, and experiences within, and while many rides have a similar name, similar theme, or similar setup, each park does offer its own unique handful of rides and experiences.

Here are a few unique ride highlights from each park:

While the selection of foods available are all pretty well the same as far as kid-friendly choices go, the exact eateries offered are much different. Your kiddo will find their favorite pizzas, pasta, burgers, and hot dogs at each park though, and you will find your parental caffeine fix in both as well, so have no fear.

This may be the area that holds the biggest difference overall, Florida's resort holding 3 different lodging options and New York's holding just one.