This 5-day NYC and DC sample itinerary is one we are really proud of here at AST, this itinerary offering your group America's best attractions, literally! Spend 3 days in Washington DC immersing yourselves into our nation's past, then travel to NYC and see our present and future come to life right before your eyes!

Begin your visit to our nation’s capital with a stop at the somber, impressive, and overall truly moving Pentagon Memorial. This memorial is just southwest of the Pentagon in Arlington County, Virginia, a permanent outdoor memorial dedicated to the 184 victims of the tragic September 11th attacks, people who were either in the building or on the American Airlines Flight 77. Walk through the sea of 184 granite covered benches, each engraved with the names of the victims. Learn all about the events of 9/11, the stories of the victims and heroes, the role of the Department of Defense and Pentagon, and the United States’ plan for preventing future attacks.

By providing a peaceful, beautiful landscape for visitors, the Arlington National Cemetery strives to honor the lives and legacies of those who served their country with distinction. The 624-acre cemetery is serenely manicured with centuries-old trees, gorgeous gardens, and honorable monuments and memorials for those who have fallen. More than 400,000 individuals found their last resting place among the iconic white headstones at Arlington including notable names such as Washington, D.C. city designer Captain Charles Pierre L’Enfant, Justice Thurgood Marshall, President Taft, and novelist Dashiell Hammett.

There are 3 main buildings that make up the Library of Congress: The John Adams Building, James Madison Memorial Building, and the Thomas Jefferson Building. Within the Thomas Jefferson Building, you will find the exhibits, some popular ones including Exploring the Early Americas, Hope for America, and Mapping a Growing Nation: Independence to Statehood. You can take a free 1-hour guided tour of this building, or take topic-specific tours that range in subject from music and performing arts to history and culture. There are also special tours such as Shall Not be Denied: Women Fight for the Vote and Exploring the Early Americas.

From the elegant stoicism of the Rotunda to the subtle glamour of the expertly manicured lawns, Capitol Hill has the creative aesthetics to match any world landmark. The neoclassical architecture resembles many of D.C.’s other sites such as the Jefferson Monument and the White House. Tours of the Capitol Building are available Monday through Saturday and explore everything from the Crypt and Rotunda to the National Statuary Hall, beginning and ending at the Visitors Center which is in itself a masterpiece. Standing at three-quarters the size of the Capitol Building, the Visitors Center was built underground so as not to detract from the majestic, classic beauty of the Capitol. There you will find exhibits and galleries featuring collections of artifacts and art, two theaters showing orientation films, gift shops, and food service areas.

Experience life the way George and Martha Washington did on the estate with living history character representations, exploration programs, and presentations. See the working blacksmith shop where they would have made horseshoes, tools, and more for the farm or explore the six-acre gardens designed by George Washington. Animals still live on the estate so be sure to visit the horses, mules, oxen, sheep, hogs, and more while you’re touring. Besides the mansion, you may also visit the tomb where George and Martha are buried, the Slave Memorial and Burial Ground, the Distillery and Gristmill where they made liquor and beer, and the Pioneer Farm where President Washington earned a reputation as a farmer and mule breeder.

One of the easiest ways to see the White House is with a walk-through tour. This is a self-guided public tour is regularly scheduled each Tuesday through Thursday from 7:30 am to 11:30, and to 1:30 on Fridays and Saturdays. During this tour you may move from room to room at your own pace, the entire tour probably taking anywhere from 20-45 minutes, depending on how much time you want to spend exploring all the presidential details. The typical route of the tour sees visitors along the ground-floor of the home and through the doors of the Vermeil Room and Library, up to the stairs to the State Floor, and then through the East, Green, Blue, Red, and State Dining Rooms. See the North Portico Lobby, famously guarded by a U.S. Secret Service Tour Officer who can also double as a wonderful answer provider to any questions you may have about the home, security, or the president.

This fully restored and renovated landmark has been made to look as it did in Civil War-era Washington, D.C. with updated amenities and a history museum on the first floor. Displays include artifacts and items such as President Lincoln's coat, the Treasury Guard flag Booth tore in his escape from the President's box, and several of Booth's possessions. See the Deringer pistol Booth used to shoot the president, his diary, knife, and even pictures of his secret fiance, Lucy Hale, who was the daughter of a U.S. Senator. For tour groups, entry into the theater includes a presentation by the National Park Service rangers, a one-act play, access to the Petersen House across the street where President Lincoln died, and the Center for Education and Leadership, a museum focusing on the president and his assassination.

Your group can board a ferry in Battery Park in New York City or Liberty State Park, New Jersey, to get to Liberty Island. A security screening is required, as are tickets in advance to see the crown, pedestal, or indoor museum. The grounds tour is the most widely available tour, allowing your group to see Lady Liberty up-close as they tour the island as well as the nearby Ellis Island. Visiting the Statue of Liberty will give you patriotic chills as you glimpse back to America’s roots and feel the history of the nation forming around you. Learn about the start of the Land of the Free, as well as the history of the immigrants that used these islands as a gateway to freedom. Be sure to check out the Wall of Honor to see if you can find your own ancestors while you’re there!

The 9/11 Memorial Museum is located at the World Trade Center’s Foundation and serves as the country’s principal institution for examining the implications of 9/11 events. Here your group will find 110,000 square feet of exhibition space within the archaeological heart of the Trade Center that extensively documents events, explores the continuing significance of, and tells personal stories from 9/11. Once here your group will have the chance to see many different multimedia displays, archives, narratives, and a collection of monuments and authentic artifacts that not only cover the 9/11 attacks but the 1993 bombings as well.

New York City is a city of landmarks and few are more iconic than the grand Empire State Building. Standing at an extravagant 102 stories plus a rooftop observation deck, this engineering masterpiece was the world's tallest building for 40 years. Currently standing as the tallest building in New York City, the Empire State Building offers the perfect landmark opportunity to stand on top of the world and look down at the gigantic kingdom of the Big Apple below. Its impressive height at 1,250 feet, the observation deck rooftop is the absolute perfect spot to observe the sights and sounds of bustling New York.

Your student group will undoubtedly love an opportunity to see a Broadway Play during your New York City visit, and we would love to send them there! Enjoy a performance on the 'world's greatest stage' some of the current Broadway showings including Hamilton, Moulin Rouge! The Musical, The Lion King, Wicked, To Kill a Mockingbird.

There is never a shortage of things to do in the Big Apple, but if you need to slow down a little from the hectic chaos of the city all you need to do is step inside the 843-acre oasis between 5th Avenue and Central Park West. Central Park is as pivotal a landmark to New York City as the Empire State Building, being the first major landscaped public park in the country, established in 1843. Since then, the park has lured millions of tourists and locals alike into the meticulously manicured gardens and amazingly diverse attractions hidden within the trees. Jog the paved pathways, picnic on the lawns, or take your dog through the park on a nice Spring day. If you enjoy nature, boat along the lake, sit and watch the flowing waterfall at the Loch, explore Shakespeare Garden, or sit and read on Cherry Hill or the Great Lawn.

Commonly known as The Met, the Metropolitan Museum of Art was founded in 1870 by a group of Americans after an inspiring trip to Paris. It was decided that the United States needed a national institution and artistic landmark comparable to the Louvre and The Met was established to furnish artistic understanding, inspire, and encourage the development of creativity. The Met is one of the largest museums in the world with two million square feet of galleries and exhibits. Permanent collections include works by Rembrandt, Albrecht Durer, Georgia O’Keeffe, El Greco, Renoir, and Winslow Homer.

Join Real New York Tours for an unforgettable, true New Yorker experience with the 3-hour Midtown Manhattan Tour. This tour combines both walking and subway riding as a transport system, meaning before you embark on this journey be sure you have 3-4 subway rides on a MetroCard. It is suggested that you start this tour around 10 am, though you can really set up any time you would like. The loose itinerary is going to take you to the very best of the best of Midtown Manhattan, including the Grand Central Terminal, Time Square, Rockefeller Center, Saint Patricks Cathedral, 5th Avenue, The New York Public Library, and Central Park.

This entertainment district runs the full gamut of amusements from live performances to Madame Tussaud’s wax museum, over a hundred restaurants, and countless shops. Take a tour of the area and possibly meet some Broadway actors after their performances, see the famed Coca-cola sign, Chevrolet clock, and explore the exhibits at the Discovery Times Square museum. See a show at The Orion or the Paramount Theatre, see where ABC’s Good Morning America is filmed at Times Square Studios, or check out the new exhibitions at the Museum of Modern Art. 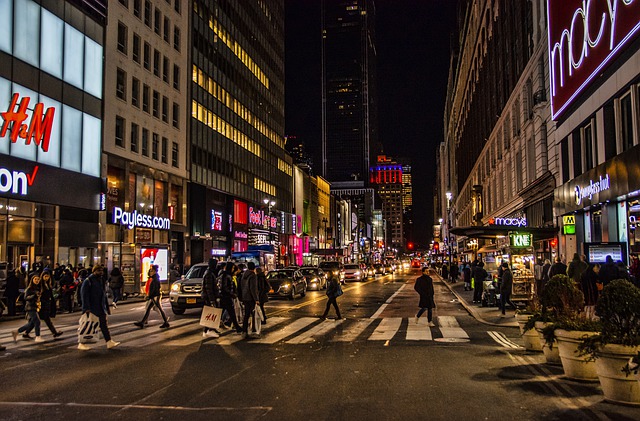